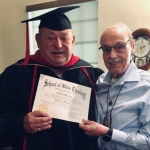 Dr. Andrew Karsten’s walk with the Lord started In 1980 in Costa Mesa, California at Calvary church under the leadership of Chuck Smith. For the next few years he studied a lot and during that time he moved to Riverside, California. In Riverside he started attending Bethel Christian Center under the leadership of Dr. Ron and Annie Halvorson. Dr. Andrew was involved in a home bible study as well as attending the college. He was involved in the Sunday night evangelism where they visited the members that requested them to visit and new attendees. In 1991 the business moved Dr. Andrew to Sacramento where he was involved in a small church that was expanding. He was helping an individual that had a ministry to the young by providing them a horse back riding experience. He maintained that when the youth got on a horse they would solve all their problems. In 1995 a group of friends started Karsten Homes, a manufactured housing company. They built this company into four manufacturing plants located in California, New Mexico, Oregon, and Texas. They sold the company in 2006 and he retired to Oregon. In Salem, Oregon he got involved with west Salem Four Square. He helped the church expand into a new building and became a member of the board. After the move the pastor went to take over the Four Square College in Fullerton, California. The associate pastor started a new church in Salem Oregon, Cherry City Church for which he became the President. He helped establish the church and help develop the operating system.

From there Dr. Andrew went to Charis Bible School in Colorado Springs, Colorado. He graduated from the College in 2013. While there he served on a group that were involved with visiting care centers. In addition to serving on the committee he visited several homes and developed a close relationship with two different men. In 2013 the Lord led Dr. Andrew to Bethel Christian Center where he became the Assistant Administrator. His functions included overseeing new construction and building maintenance, landscaping. and missions. They developed a mission program that was supporting 10 different missionaries. With the change of the guard the program was discontinued. In addition, he brought a lot of the teaching from Charis with along, which was used throughout the church. Along with his wife, they taught a new member class, and a class that dealt with the Gifts of the Spirit. When this class completed they started a Class that taught from Andrew Wommack’s book on 48 lessons on Discipleship. The class closed but they continued distributing the teachings. The Karsten’s are currently sending these lessons every other week to 125 different people, some of which are in Spanish. There have been 50 individuals that have completed the entire course. Since he graduated he taught a class in Bethel’s college on the Pentateuch and is studying to teach the life of David in January 2020. When Pastor Ron retired they moved on from Bethel. However, they are still involved in the support of several ministries. Delron and Peggy Shirley who lead the Teaching all Nations, Mike and Pat Heizer, heart of gold Fellowship in Kenya, Kenneth Copeland Ministries, Jonathan Cahn ministry, Linda Hughes, “My Kids” a missionary program in Pakistan, and with Tim Gidley and Crown Voice Ministry. In addition to being on Dr. Ron’s board as CFO they are helping several individuals that the Lord has led them to.