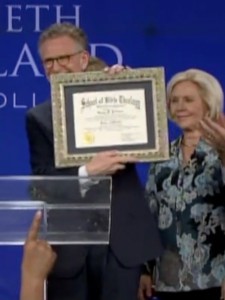 The Citation of George D. Pearsons Doctor of Divinity ~ Honoris Causa ~ May 10, 2018

From the idyllic surroundings of Cape Cod emerged a young artist and dreamer, George D. Pearsons. Following in the footsteps of his father, his sights were set on New York City, and his plans to run a major art studio. In 1973, the second-year student of Boston’s prestigious Massachusetts College of Art and Design had an encounter with the Lord, instilling within him the dream of becoming a pastor.

In unwavering pursuit of God’s divine direction, George attended Oral Roberts University in 1975,  where he was wonderfully filled with the Holy Spirit. It was there that he met his wife to be, Terri, the eldest daughter of internationally renowned minister, Kenneth Copeland. At ORU, he worked as an integral member of the set team for Oral Roberts’ one-hour prime time special broadcasts.

After a year at ORU, George relocated to Fort Worth, Texas, for the summer to launch the Kenneth Copeland Ministries (KCM) Art Department. He then travelled with Brother Copeland as a band member and music composer. George later became Director of the KCM Publishing Department. With a visionary anointing, he elevated the ministry newsletter into a leading magazine. In 1980, when KCM broadcasted the very first world-wide communion service, George hosted the program connecting satellite locations joining the service. During the years of 1988 through 1996 George served faithfully as Executive Director for Kenneth Copeland Ministries. In 2003, George became the Oral Roberts University (ORU) Ministers’ Alliance Co-Leader, relaunching the alliance and seeing it grow tremendously. He served from 2004 on as an ORU Regent, and in May 2007, became Chairman of the Board of Regents.

For 42 years, George has led a life of excellence in ministry. He is a prolific writer and author, an accomplished musician, a spiritual father to many, a pastor of pastors, a gifted teacher, and television host. He is known for his teaching on divine prosperity alongside Gloria Copeland on the Believers’ Voice of Victory broadcast. He and his wife, Terri, are the Texas State Directors for Christians United for Israel. Since 1993, they have served as the Senior Pastors of Eagle Mountain International Church. Accepting a mandate from Brother Copeland, George serves as the Chief Executive Officer of Kenneth Copeland Ministries, working to see the proclamation of the Gospel on every available voice.

Therefore, upon the nomination of the KCM Executive Team, the Kenneth Copeland Bible College Executive Team, and his family, and in honor of his achievements, his many contributions to the body of Christ worldwide, and for dedicating many years of faithful service in ministry, The School of Bible Theology Seminary and University is pleased to hereby award Pastor George D. Pearsons with the degree of Doctorate of Divinity. This honorary degree reflects the highest esteem for his consistent Christian lifestyle, his love for God and humanity, his walk of faith and for his uncompromising ministry of the eternal verities of the Holy Bible.