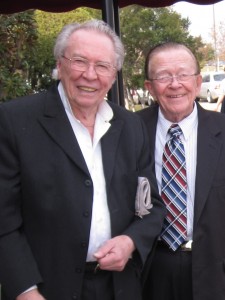 Founder a of Family Cathedral of Praise Church of Mesquite, Texas was born May 4, 1925 in Nocona, Texas and departed this world December 21, 2010. He was preceded in death by his beautiful wife of 61 years, Jimmie Laverne Sewell; baby son, Kevin Wayne Sewell; and parents, Lee & Mary Jo Sewell, all of whom he was looking forward to seeing again on the other side. He is survived by his daughter, Sheree Stacy; son and daughter-in-law, Harry Lee & Debbie Sewell; and daughter and son-in-law, Suzanne and J.D. Mayo, as well as seven grandchildren, twelve great-grand-children, three sisters, one brother, and a host of nieces, nephews and other family members. As a young man returning from active duty in WWII, he made a decision to become a minister. His wisdom and guidance left him with peace and comfort knowing that his entire family will continue his ministry. After serving in evangelism for approximately 20 years, he began pastoring at FCOP and continued for almost 45 years. During this time he also pioneered missionary churches and schools in Cartagena, Colombia, South America, as well as Africa. During all of those years he was so much more than just a pastor. He was a friend, mentor and spiritual father to all who met him. He exemplified the epitome of a man who continually used Christ as his barometer for the man he strived to be. To his last breath he continued to declare his belief and love of God.