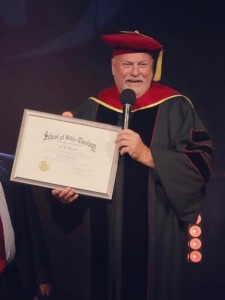 In honor of his 40 years of dynamic Holy Ghost ministry, we take a joyful look back to where it all began! Throughout 1976 and 1977, Pastor Jan K. Hanvold responded to God’s life changing call by attending Troens Bevis Bible and Mission Institute. From that time until 1982, Pastor Jan traversed the country of Norway and all across Eastern Europe as an anointed evangelist. In 1982, he founded Inter-Misjon, which today is called Mission Without Borders, an organization that he gave away to underground evangelism.

Throughout the years of 1984 through 1989, God gave Pastor Jan mighty increase and blessing, enlarging the impact and scope of his ministry outreach. He birthed New Vision, a wonderful organization whose mission efforts reached Eastern Europe, also having a Bible School in Norway. Then, together with Pastor Hans Bratterud, he founded the very first Christian satellite channel in Europe, the European Broadcasting Network. It was also in 1989 that Pastor Jan founded Vision Bible Center, effectively spanning both Eastern Europe and the former Soviet Union through meetings, the planting of new churches and embracing unreached peoples. One such precious tribe were the Shoria people of East Siberia, who were blessed to have Jan Hanvold as the first pastor to reach them and connect with them, resulting in the planting of 20 on fire churches among them!

Throughout the years of 1994 through 2003 Pastor Jan persevered, as he ran a local radio and television station in Norway. With a heartfelt focus on revival and reformation, he founded a leading Christian television channel called TV Vision Norge. With its 10,000 Norwegian partners, en masse it reaches 96% of all households throughout Norway, Sweden, Denmark, and the Faroe Islands, adding souls to Christ’s Holy Kingdom daily. He also founded Vision Norway Bible School.

TV Vision Norway provides humanitarian aid, conducts evangelistic campaigns, and plants new churches throughout Albania, Bulgaria, Estonia, Georgia and Moldova. In Moldova alone, Vision Norway and the Filadelfia Church in Khrisnov have founded the first preschool in 1999, an elementary and middle school in 2000, a high school in 2009, and have plans to build a Christian University. They founded and built the Sarepta Elderly Home, as well as a handicapped centre in Sarata Galbina. Their faithful support of missions totals 1 million US dollars annually. TV Vision Sweden was born in 2015, whose passionate focus is to reach Sweden’s immigrant population and to provide special programs in Arabic and Farsi. Pastor Jan’s founding of the Israel channel effectively supports the precious Jewish people with financial aid, and broadcasts the Good News. Their annual pilgrimage culminates in an exciting live broadcast from the Feast of Tabernacles, uniting with the International Embassy in Jerusalem.

Pastor Jan is joyfully wed to his beautiful wife of 20 years, Inger. He is proud father to Christoffer, Alexander, Josva and Debora. From the year of 1987 until the present, he has written 5 books.

Therefore, Upon the nomination of Pastor Maksymilian Pyra, Pastor Doru Cirdei, and Dr. Tim Peterson (ORU D.Min), and in honor of his achievements, his many contributions to the local community and the world, and for dedicating many years of faithful service and ministry to the body of Christ, The School of Bible Theology Seminary & University is hereby proud to honor Pastor Jan K. Hanvold with the degree of Doctorate of Divinity. This degree reflects the highest esteem for Pastor Hanvold’s consistent Christian lifestyle, his love for God and humanity, and for his uncompromising ministry of the eternal verities of the Holy Bible.