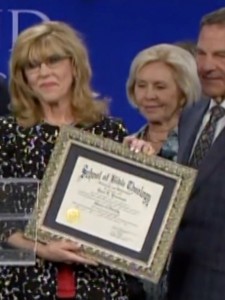 Location: Forth Worth, Texas

Terri Copeland Pearsons has faithfully supported her father, Kenneth Copeland, and his Holy Gospel Commission to proclaim God’s Glorious Word around the world on every available voice. She first discovered the adventures of prayer as a little girl praying at her grandmother’s side. Her grandmother, Vinita Copeland, and she spent many hours in prayer for her Dad’s salvation. Drawing on that rich heritage of faith, she connects people with the living presence of God, teaching them who they are in Christ Jesus and how to pray from that position.

Utilizing her budding journalistic talents and literary flair, Terri produced her junior high school’s first newspaper. In high school, she was the first person to hold the position of Editor for two years.    Later embracing her formal broadcasting education at Oral Roberts University during the late 1970’s, Terri assisted in teaching audio to first-year students and was an integral crew member on Oral Robert’s television broadcasts. From her teen years, Terri’s vision was to launch her Dad on television. This media pioneer effectuated 13 years as developer and producer of the “Believers’ Voice of Victory” television broadcast, helping establish Kenneth and Gloria Copeland as forerunners in television ministry. She also was the producer for the innovative broadcasting of the first worldwide Communion Service.

Terri’s 44 years of Word of Faith Ministry are a God-breathed crescendo of radio, broadcasting, preaching and teaching, television appearances, social media presence, and gifted stage and music production. She is an accomplished writer, author and producer. Terri has an anointing to bring the redemptive realities of God’s Word alive and is a beloved speaker with a prophetic voice to the nations. Since 2007, Terri has served as the Texas State Director for Daughters for Zion, and she and her husband, George, serve as Christians United for Israel’s Texas State Directors.

Since 1993, they have been the Senior Pastors of Eagle Mountain International Church, from where Terri has ignited a fire in believers worldwide for prayer. Accepting a mandate from her father, Terri serves as Kenneth Copeland Ministries’ “Chief of Staff.”

Therefore, upon the nomination of the Kenneth Copeland Ministries Executive Team, the Kenneth Copeland Bible College Executive Team, and her family, and in honor of her achievements, her many contributions to the body of Christ worldwide, and for dedicating many years of faithful service in ministry, The School of Bible Theology Seminary and University is pleased to hereby award Pastor Terri Copeland Pearsons with the degree of Doctorate of Divinity. This honorary degree reflects the highest esteem for her consistent Christian lifestyle, her love for God and humanity, and for her uncompromising ministry of the eternal verities of the Holy Bible.