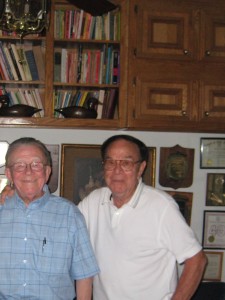 Dr. Worden loved “The Word” of his Lord Jesus Christ..Worden taught in the Deer Park and Pasadena I.S.D. He served in Christian ministry along with his loving wife of more than 68 years, Mary Lou (Shaw) McDonald. He became the President of Southern Bible College and Pastor of Trinity Church, Houston, Texas, and New Life Cathedral, Edna, Texas. He also served as a Commissioner to Transworld Accrediting Commission International, Riverside, California. Dr. Worden received a Doctor of Philosophy from School of Bible Theology, Doctorate from Wayne State Seminary, graduated with honors from The University of Houston and from Edna High School , Edna, Texas. Worden traveled to many places in the world as a Pentecostal Church of God, Joplin, Missouri, representative. In everything, he wanted young people WORLDWIDE to become educated and to find his Lord. He remained faithful to his calling and the www.PCG.org Dr. Worden was the consummate pastor and he loved his congregation and “bible college kids..” During Worden’s sixty-eight years of ministry he always practiced the forgiving spirit of Christ.